I am digressing and those of us with ADHD usually do. 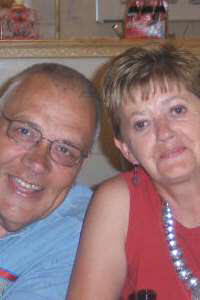 On the Monday morning we dropped by Jody’s apartment to pick her up for brunch which was to be our Thanksgiving meal and Dad needed to pee. The small apartment had one bathroom and it was on the second floor. I traipsed up the stairs with no issue, but on the way down, I somehow missed the last step and I fell forward landing in sort of a push-up position absorbing most of the kinetic energy from the fall with my outstretched arms and as a result my shoulders. The shoulder pain was most unpleasant as you might well imagine. Getting up was a challenge. I kind of slithered on the floor to the back of a sturdy couch and with a lot of effort and pain I managed to upright myself. I sat for a while pondering my next move.

Well I got through the day, I think Cheryl drove me home as I had taken some pain killers that I just happened to have with me. Then the next day, of to see the doctor and I was shunted off to the room with that big MRI machine that was humming its tune for me. No luck! Within five minutes or so I was in total agony, I was trying to remain still but the pain and the tears in my eyes screwed that up. For some reason I could not lay in a supine position with my arm locked by my side. Recumbency was not for me.

The orthopedist was unsympathetic as many surgeons are. I sometimes think that some surgeons chose that profession because they would not have to chat with people for more than a few seconds while the anesthesia is taking effect. Those of you who are Doc Martin fans will understand.

He said that, he believed the problem to be a rotator cuff issue in both shoulders but without an MRI, he could not be sure. Another MRI was scheduled with Hydrocodone and Valium thrown in to reduce my anxiety. Still no luck, I was in the machine for less than 10 minutes, my teeth were clenched and there I was crying again.

What better time to break out my Curatron 2000 XP and the 700 Gauss ‘B’ Coil. My right shoulder was the worse off of the two and I started two half hour treatments a day while I watched TV or read a book. I did focus on the right shoulder.That’s the dexter side not the sinister side which turned out to be the correct shoulder.

I continued off and on for a couple of months and things really started to get much better. Against my doctor’s advice, I kept going. The doctor told me things would continue to worsen and I would be going under the knife one day in the future. Well here we are in 2014 with two and half years or more between October 2011 and today and my shoulders feel great. I admit it that they are a little weaker than they once were, and once in a while while reaching something on a upper shelf I get a twinge of pain. I doubt I’ll ever have shoulder surgery relating to that 2011 incident. As they say, I’m a happy camper.

I attribute most of my healing and pain reduction to the Curatron and for that I’m thankful. Yes I have a bias because I sell the Curatron and have done for over 14 years. I cannot sell things I don’t believe in.

For those of you who enjoy doctor speak. I did have a successful xray taken and the radiologist’s report reads:

Osteophyte formation is seen in the acromioclavicular joint with mild narrowing. Osteophyte formation is seen in the inferior portion of the glenoid and humeral head. Narrowing is seen in the subacromial space. There is irregularity along the greater tuberosity which suggests rotator cuff tendinosis. Ossific density is seen medial to the femoral head on the scapular Y-view may represent a small loose body within the subscapularis recess. No acute fractures or dislocations are noted. Soft tissues appear unremarkable.

My personal use of the Curatron extends to my right foot and  Plantar fasciitis and my lower back. I’ll write about those experiences later.